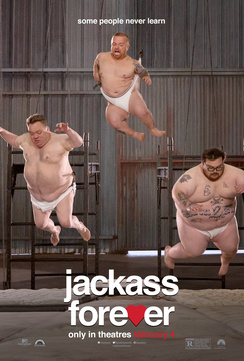 My father is French Canadian. That means that he had me on ice skates when I was two years old and I played hockey my whole life - until recently. You see, all of those bumps and bruises finally added up to more than the whole and one brutal hit was all it took to end my hockey career forever.

A double spinal fusion later, I'm still able to walk, but my hockey days are most likely behind me. Of course, my orthopedic surgeon did say that I had the same surgery as Payton Manning and he came back from it to win a Super Bowl, so there's a chance.

Watching the latest installment of the Jackass franchise, I couldn't help but see the parallels of my own injuries and wonder if they will ever give up the Jackass ghost. Johnny Knoxville just turned 51 and as the movie's tagline says, "Older but not Wiser."

Older but not wiser, Johnny Knoxville and the crew are back for the most unbelievably outrageous jackass yet. Brace yourself as they reach new levels of immaturity and with a little help from some brave new friends and guest stars, their wildly outrageous pranks and dangerously bone-crunching stunts will have you laughing until it really, really hurts. Some people never learn.

Jackass kicked off as a TV show on MTV in 2000 and YouTube debuted in 2005. Had their births been reversed, I'm fully confident that Johnny Knoxville would have been the highest-paid YouTuber of all time. Heck, he might still be and he was late to the game.

That said, Johnny Knoxville made a nice career and earned copious amounts of money for basically sacrificing his body to the comedy gods. I will admit that early on I was attracted to the show simply for the carnal oddity of it all. There's something about pure pain being inflicted on willing participants that titillates the human soul.

Going in, I felt that Jackass Forever was just another cash grab that would kick the not-quite-dead-yet corpses of its cast for another string of torture debauchery with little more to add to the genre, but I was a bit wrong. While the crew certainly expanded its reach out of necessity (RIP Ryan Dunn & Stevie Lee), most of the original cast of characters entered the breach one more time for Jackass Forever.

While the pranks were a bit on the nefarious side, the one running prank about a cup check with Ehren McGhehey certainly caught my attention. Whether it was a Heavyweight Boxer or a Softball player, getting a punch or fast pitch to the nards is no laughing matter.

But, of course, I was laughing my head off.

At least until P.K. Subban skated onto the set.

Remember, I played hockey for over 40 years and I spent a good 30 of those playing goalie, so I know a thing or two of taking a slapshot to the nuts. For the curious at home, my goaltender jockstrap was a double cup with the top cup being steel-plated. When your manhood is at risk, you don't mess around with a cheap jockstrap.

You also never settle for a normal jockstrap. I've heard too many stories of regular jockstraps splitting from a shot and the resulting bloodshed to take any chances. So, when Ehren McGhehey took the net with nothing but I regular jockstrap, I cringed.

While P.K. Subban doesn't have the hardest slapshot in the league, his shot is easily over 90 MPH on the regular and I'd be a little leery taking it off my industrial jockstrap, let alone a simple regular one that you can find in any sporting goods store.

This is just one of several pranks that help to fill the 90 minutes with laughs, cringes, and a sense of nostalgia for a youth in which we were proud to stare down death on a daily basis. As I've gotten older, I think that I've gotten wiser, but the Jackass crew shows no sign of the maturity one would expect from surviving two decades of debauchery.

While I might someday return to the rink, there seems to be no slowing down for Jackass. After earning nearly $60 million at the box office, I think it's safe to say that we will continue to see this franchise flourish until the audience has had enough or Johnny Knoxville takes one too many knocks to the head.

Jackass Forever is now available on Blu-ray and DVD.