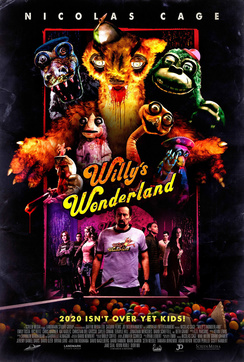 It's not often that we review theatrical releases on our site. Given our focus on home entertainment, we usually wait until the inevitable release on Blu-ray and/or DVD to share our thoughts.

But the times, they are a-changin'!

At least for this week. Our good friends over Screen Media hooked us up with a screening link of their newest film Willy's Wonderland starring Nic Cage and I couldn't resist. Don't worry, I'll be sure and re-publish this review when it lands on Blu-ray later this year.

I have never played the videogame "Five Nights at Freddy's," but I hear it would be right up my alley. The game centers on animatronic characters from a Chuck E. Cheese type establishment who come alive and go on a bloody rampage at night.

It's a very popular franchise and it seems that its fans have been very vocal about seeing it up on the big screen someday. And to be fair, the story does have all of the crucial elements for a cult classic horror franchise. The creepiness and nostalgia factor alone would bring in both fans and non-fans of "Five Nights at Freddy's" alike.

In 2019, The Banana Splits Movie tried to capitalize on the success of "Five Nights at Freddy's" by turning what was supposedly a rejected script for that franchise into a bloody take on the 1970s children's TV show. The Banana Splits Movie conjured enough chills and nightmares to garner my recommendation, but I always felt that something was missing.

That something, apparently, was none other than v.

Cage stars as a quiet loner who becomes stuck in a small, backwoods town and agrees to clean up an old family pizza entertainment center in exchange for costly repairs to his car. What should be a routine night of hard labor quickly escalates when the animatronic characters in the restaurant come to life and go on a bloody rampage.

Yes, that's right. Nic Cage has to battle a horde of blood-thirsty animatronics. It's like my adolescent love of horror films got down and dirty with my unabashed reverence for the National Treasure films and had a baby that is Willy's Wonderland.

The film probably won't win many awards, and it's sure to get bashed by any self-respecting "critic," but don't let that fool you. Willy's Wonderland is everything that has been lacking in movies since the start of the pandemic over a year ago. It's fun and quirky and pays homage to some of the best cult classic and horror films ever released.

The film's premise is eerily reminiscent of Cage's remake of The Wicker Man and channels early Quentin Tarantino and Robert Rodriguez. In fact, with a few slight changes, you can totally see From Dusk Till Dawn it the DNA of Willy's Wonderland.

Did you ever visit Showbiz as a kid? It was that Chuck E. Cheese knockoff that featured an animatronic band called The Rock-afire Explosion that would play while you ate their cardboard pizza. It was beyond creepy and that animatronic band fueled my nightmares for weeks after a visit when I was a kid. I get a chill just thinking about it right now. Willy's Wonderland perfectly captures that nostalgic creepiness that lingers deep within our subconscious waiting to terrify our nightmares once again.

As anyone who has been following me for longer than 10 minutes can attest, horror films of the 1980s are my bread and butter. I've seen so many and love the cheesiness that this era became known for. In many ways, I was transported back to my teen self while watching Willy's Wonderland.

To give you an idea of just how bonkers this film is, I wouldn't hesitate to compare it to Killer Klowns From Outer Space. Willy's Wonderland captures that same brilliant, yet delicate, balance between horror and comedy that both captures your imagination and chops it into shreds moments later. You know that what you're watching is completely absurd, yet you can't pry your eyes away from the screen.

And yes, the performance from Nic Cage is a major reason for this obsession. If you ever wanted to see Nic Cage channel his inner Silent Bob, then Willy's Wonderland is for you. I think Kevin Smith would be proud of Cage's one-note (and one-word) performance while the film itself compares favorably to his own Yoga Hosers and Tusk.

Also, you did read that correctly. I really hope the filmmakers paid Nicolas Cage by the word because they would have gotten a hell of a bargain. As the mute protagonist only referred to as "The Janitor," Cage utters just a single word (if "Ahhhhh!" counts as a word) in the entirety of the film's 88-minute running time.

And no, I won't spoil the film for you, but he doesn't have a part akin to Drew Barrymore's in Scream. He's the real deal in this movie and the normally loquacious actor is somehow even more peak Nic Cage without his witty banter.

As a horror film, the filmmakers spent a lot of time with exposition world-building that would normally be relegated to the sequels in the 1980s. While you could argue that one or two of the flashbacks were unnecessary to service the plot of Willy's Wonderland, I didn't feel like they took away from the pacing of the movie at all. In fact, I was generally interested in the backstory here.

And yet, despite the story-building, the filmmakers made it a point to be as mysterious as possible concerning Cage's silent protagonist. I feel that there's another whole film or two that could be spun about his character and background. With the film's established attention to detail, I kept expecting to be fed more information on him, but it never came.

This lack of explanation simply made his character even cooler in my eyes. I want to ride the backroads of America with The Janitor eradicating the world of psycho animatronics. All we need is our fists, some Punch Pop and a bevy of quarters to feed all those elusive pinball machines.

Willy's Wonderland is now available on VOD and playing in theaters. It will be available on home entertainment later this year. 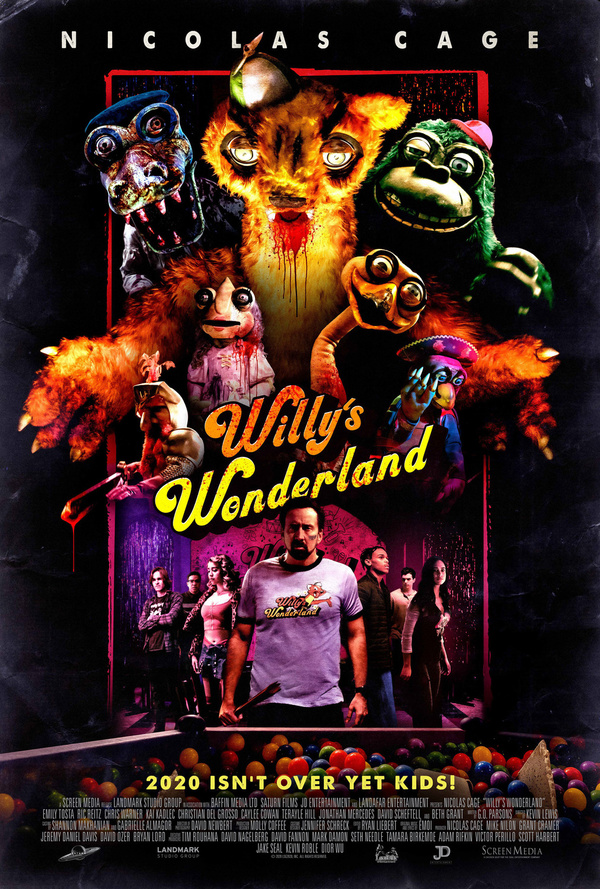