Review: Shia LaBeouf is scary good in 'The Tax Collector' 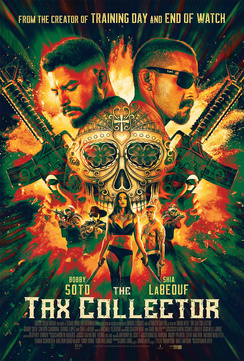 Love him or loathe him, Shia LaBeouf is an actor that definitely elicits a response. There doesn't seem to be much middle ground with the guy and while his choices seem suspect at times, he always seems to go all-in for whatever role he is playing.

Hot off great performances in The Peanut Butter Falcon and Honey Boy, it appeared that Shia's career was back on the rise. And then, the reviews started to roll in for The Tax Collector. Almost universally bashed, the David Ayer film seems to be the Razzie du jour for critics, but what do critics know?

As we've mentioned many times before, this year has been irrevocably changed by COVID-19. With limited entertainment options available, suddenly second and third-tier titles are finding a more gracious audience with the general public.

But, don't sleep on The Tax Collector.

Two "tax collectors" who collect tithings made from local criminals to their crime lord employer Wizard find themselves in the crosshairs when their boss's rival returns from Mexico. Now they have to prioritize their life and weigh their allegiances as the bullets fly.

With David Ayer, you know what you're going to get. Slick action and heart-racing pacing that will keep you on the edge of your seat. Unfortunately, you either get great films like End of Watch and Training Day or not so great fare like Suicide Squad and Bright.

Personally, I can find something enjoyable in all of his films, but some are certainly more palatable than others. The Tax Collector is a classic movie where critics pan it while normal moviegoers enjoy it thoroughly.

Unfortunately, I think that COVID-19 was a double-edged sword for The Tax Collector. On the one hand, losing its theatrical window robbed it of getting the attention of movie fans with the type of marketing campaign that makes or breaks films. On the other hand, The Tax Collector is a true diamond in the COVID rough that will definitely find a willing audience in the current wasteland of new home entertainment choices.

Ayer doesn't stray too far from the tried and true formula of gang warfare films and he is able to elicit a legendary performance from 1205{Shia LaBeouf. Some might call it clichÃ©, but I call it a great homage to films like Colors and Sicario.

Ayer's unique twist by focusing on the tax collectors will give some the film they hope they would eventually get from Quentin Tarantino that focused on Vincent and Jules. In many ways, The Tax Collector felt like a grittier take on these vital, yet unsung, thugs that carry out the orders from their crime lord employers.

While Shia LaBeouf's performance is amazing and completely over the top, I would be remiss if I didn't mention his partner in crime Bobby Soto. He's a relative newcomer and I wasn't immediately familiar with his body of work until watching this film.

All I can say is that he's the real deal and as the sane yin to Shia's insane yang, he perfectly compliments his co-star. It's fair to say that he has a brilliant career ahead of him and I can't wait to see where this movie takes him.

The Tax Collector is a movie where you need to check your brain at the door and simply enjoy the mindless carnage that follows. There has been a real lack of high-level films that meet this niche on home entertainment and I know that a ravenous audience will devour it with vigor.

The Tax Collector is now available on Blu-ray, DVD and Steelbook 4K UHD.