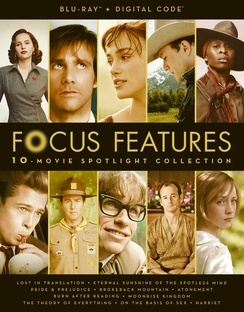 As the Summer of COVID turns into the Fall of discontent (especially at the box office), movie studios are scrambling to find unique ways to stay relevant. This is especially true with the usually lucrative fourth quarter holiday spending spree on the horizon.

The only problem is that traditionally Summer blockbusters would be leading the charge as they arrive on home entertainment for the first time. With no theatrical releases this Summers, studios are looking to their vast catalog of movies to focus on the gift-giving aspect of the upcoming holidays.

One studio that is getting a jump on their peers is Universal Home Entertainment. This week, they released a slew of compilations and collections that will appeal to even the most discerning movie fan. Whether it's comedy, sci-fi, or action, Universal has a collection just for you.

As you can discern from their titles, these collections were curated from specific top-selling evergreen movies that will satisfy for many years to come. Available at a special price point, you can own these magnificent offerings for as little $5.50 per film on DVD or $7.00 per film on Blu-ray. That's a remarkable bargain and with the holidays right around the corner, you'll be able to cross off your list in one fell swoop.

Let's face it, thanks to COVID, the holiday shopping season will be unlike any other that we have seen to date. More people will turn to online shopping and with the potential of more quarantine time in the future, who wouldn't love a collection of their favorite films to help them pass the time?

No matter who you are shopping for, Universal has a collection of specially curated films that will be a hit for all audiences. So whether you're looking for something fun for your young niece or that college student who is just getting into horror films, Universal Home Entertainment has you covered.

Let's take a deeper look into these four special collections.

If you've got a budding horror nut on your hands, then this spooky collection is perfect and the timing couldn't be better. All of these films would make for perfect viewing in October leading up to Halloween.

Blumhouse Productions made a name for themselves with their low-budget horror films, but they didn't let their lack of pricey special effects hamper their storytelling. Blumhouse movies consistently pack all of the spooks and scares that one can handle and they have established themselves as the premiere horror label in town.

Notable films like Get Out, The Purge and Split share this collection with more whimsical films such as Happy Death Day. And yet, they all work when taken as a whole. If you're looking for more traditional scares, you'll get plenty of those, but if you're looking for some laughs to go with your chills, you can find that as well.

For me, the surprise of the set is Happy Death Day. It's a film that I recently discovered and I absolutely enjoyed it. Think of it as Groundhog Day meets Scream, but twice the fun. So much so, that I had to immediately seek out the sequel for a great double bill. If you have little ones around the house as I do, then this Dreamworks collection will be right up your alley. These films will tickle the fancy of children and kids at heart alike and it's a good way to introduce your kids to some older animated films that they may not have had the chance to catch yet.

Spirit: Stallion Of The Cimarron is a classic film that many young ones haven't had the pleasure of seeing yet. But, it's a great film with a great message that truly epitomizes the spirit or Dreamworks.

While many kids will be familiar with Shrek and Trolls, this collection will offer them many repeat viewings. As a parent, these types of collections are worth their weight in gold.

This collection is a nice sampling of the Dreamworks catalog without digging too deep into each franchise. The nice thing is if your kids find that they enjoy Shrek, Madagascar, or Kung Fu Panda there are plenty more films in each franchise to dig deeper on. Another wonderful collection of films for the whole family, the Illumination collection showcases the great offerings from this upstart animation house. What started out as a mix of animation and live-action in Hop, Illumination really found its niche with animated films that appeal both to kids and parents alike.

Unlike the DreamWorks collection, this curated set dives deep into each franchise with multiple Despicable Me and The Secret Life of Pets films. These timeless new classics will keep you entertained for many hours and I can testify that they do hold up to multiple repeat viewings.

Sing is the stand-out film on the set for me as it's a great time with a rollicking great soundtrack. It's a film that sneaks up on you and really gets you in the feels before you know it. Taron Egerton is able to showcase his vocals that would later shine in the Elton John biopic Rocketman.

The real driving force behind these films is the talented filmmakers that are involved in them. In particular, writer Brian Lynch has crafted the world of Minions and Hop and he cut his teeth working with Kevin Smith. Speaking of Kevin Smith, his producing partner Scott Mosier directed Dr. Seuss' The Grinch. If you're looking for more adult themes, then the Focus Features collection is for you. This set is filled with a plethora of Academy Award winners and great films.

Everything from Brokeback Mountain to Eternal Sunshine of the Spotless Mind to Moonrise Kingdom, there's something for every discerning cinephile. Focus Features as a label has really distinguished themselves as a leading provider of quality filmmaking and their films never miss.

With the passing of Ruth Bader Ginsburg, the inclusion of On the Basis of Sex in this collection is sadly timely. The film is a great representation of her remarkable life and has been in demand since her passing.

We all have movie buffs in our lives and they will appreciate this collection because this quirky collection includes many films that many people didn't buy to own off the bat. But now, all of them together at this great price makes this an incredible offer that is too good to pass up.

Another film worth mentioning, and the most recent release, is Harriet. Relative newcomer Cynthia Erivo was nominated for Best Actress last year and many people seemed to sleep on this provocative new take on Harriet Tubman's story.