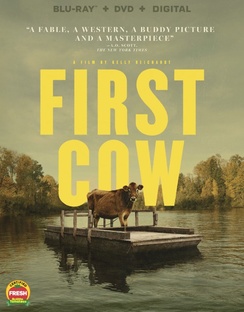 On Sunday evening, I got to see Tenet. It was loud and spectacular and amazing. It was a great film.

On Monday night, I settled in to review First Cow. It is everything that Tenet isn't. It's slow and quiet, but it is also a great film.

Both of these films couldn't be more different and yet they were equally stellar and elicited emotional reactions within me that only a good film can produce. They reminded me that it's a good day to be alive.

First Cow is set during the 1820s in the Oregon territory and follows the unlikely friendship between two men from different backgrounds and a milk cow. Cookie, a would-be fur trader who is better at cooking, and Lu, an Asian man with a past, cross paths and hatch a scheme to get rich.

There's a reason that A24 is the best in the business at selecting high-quality independent films. They have a keen eye and I've talked at great length here in previous reviews that they just seem to have the Midas touch when it comes to picking winners.

First Cow is no exception.

At first I was disarmed by the slow and methodical plotting. After having just seen such a fast-paced action film, I was taken aback by the deliberate speed to First Cow - but in a good way.

This film is a character study in the American spirit that has fallen out of fashion as of late. In many ways, we have seen Anglo and Native American friendships in the Old West (think Dances with Wolves), but it's not often that we get a true Anglo and Asian pairing during this time period.

No, this is a rich tapestry of friendship that is as much, if not more so, a piece of Americana as any other film set in the Old West. More than that, it's as timely now as our country faces racial strife once again as it was during the time period that it is set.

There are many great lessons to be learned, but they are probably best discovered on your own, so I won't spoil them for you here. Just know going in that this film will unravel around you at its own pace and when it does, you won't be able to let go.