Review: 'Doom Patrol' is a breakout hit for DC 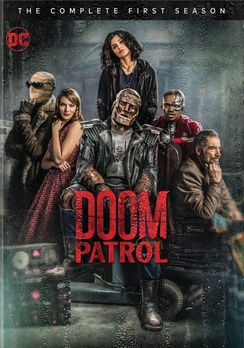 Warner Bros. Home Entertainment provided me with a free copy of the Blu-ray I reviewed in this news story. The opinions I share are my own.

With "cutting the cord" becoming an ever-increasing reality when it comes to TV and entertainment, every single content provider is racing to join the streaming wars. While $7.99 or $9.99 per month might not sound like a lot of money, trust me, it adds up rather quickly.

So, taking into consideration budgetary concerns, it's necessary to make difficult decisions. With two kids and my undying obsession with all things Star Wars, Disney+ is a no-brainer, but I'm not the biggest Star Trek fan, so CBS All Access was an easy pass for me.

One streaming option that I was really on the fence about was DC Universe. I mean I like Batman and Superman as much as the next guy, but DC's track record in movies hasn't been so hot. Of course, Greg Berlanti has been killing it on the TV side with his CW Arrowverse, so would DC Universe be more like the former or the latter?

Ultimately, I decided to pass on the DC Universe for now and let them establish themselves and reconsider it down the line. With the whole Swamp Thing fiasco, things didn't start out too hot for DC Universe, but then I started to hear some killer things about Doom Patrol and wasn't surprised to see Berlanti listed as an executive producer. That's pretty smart DC.

A team of reluctant heroes who are all shunned by society is pulled into a mission when their leader Dr. Niles Caulder ("The Chief") disappears under very mysterious circumstances. As they dig into The Chief's past, they find out that they are more connected than they originally thought and their mission is vital to not only saving their leader but also for providing them with the answers they seek.

While cable TV will see the most significant hit from the cutting-the-cord movement, physical media should actually see a nice little bump from it. Case in point: Doom Patrol: The Complete First Season. While it's hard to justify the monthly cost for one show, I can tell you that this show is worth the $20 or so to own.

If you're a fan of the CW's Legends of Tomorrow, then you'll most certainly want to check out Doom Patrol. Both shows are similar in tone and feature more of the fantastical that is more often than not missing or glazed over in DC films. Doom Patrol sort of reminds me of Suicide Squad meets the X-Men, only better.

In fact, it's pretty easy to make the connection between the former's "freaks" and the latter's "mutants." Heck, both teams are even led by a secretive leader that is confined to a wheelchair. Don't worry, DC and Marvel often "borrowed" liberally from each other over the years. That's what makes a good rivalry, no?

But with Doom Patrol, DC has sort of cracked the code on the misfit superhero mystique that has long eluded Fox with the X-Men. The key, as it turns out, is to cast wisely and invest heavily on character development. This is something that Berlanti has perfected over on the CW, so it's not surprising to see his fingerprints all over this.

The casting is really superb and a bit risky for a show that is basically a streaming exclusive. Big names such as Brendan Fraser, Matt Bomer, Alan Tudyk and Timothy Dalton are all on their game giving the series a unique emotional depth that is hard to find on even the biggest network shows. Frankly, they nail it from the get go and this investment triggers the same in the audience and suddenly a series with unicorns and farting donkeys seems believable.

Doom Patrol is the type of show that will almost certainly develop a cult following (if it hasn't already) and will help to bolster DC's new streaming service. However, as I alluded to earlier, a good streamer is only good for physical media as it allows them to put out a DVD and Blu-ray for posterity and it allow new fans to catch up on the show before making the plunge to sign on for the service.

With a flood of new creative talent coming over to the DC side of things, the future looks quite bright and shows such as Doom Patrol will only help to cement things on the small screen side of things as DC and Warner Bros. catch up on the big screen. A year ago, I was hesitant to invest in the DC Universe, but now I'm ready to jump on board and support such wonderful examples of storytelling as Doom Patrol.

Own Doom Patrol: The Complete First Season on Blu-ray and DVD today.