Review: Bruce Willis is a one-trick pony in 'Reprisal' 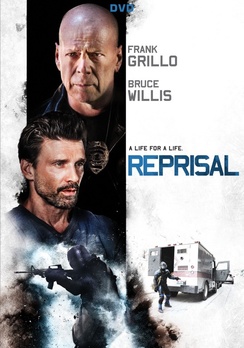 Stop me if you're heard this one before: Bruce Willis stars as a cop that must [insert action cliche here] before [insert tired movie trope here].

Look, I get it. Bruce Willis has made a very respectable living playing a cop, but now that he's starting to get a bit long in the tooth, he has transitioned into playing ex-cops. Enter Reprisal.

Bruce Willis' ex-cop is tapped by his neighbor to help him bring down an assailant who had previously robbed his bank and killed one of his coworkers. The master thief doesn't particularly enjoy being the main player in a game of cat-and-mouse, so he turns the tables by kidnapping the bank manager's family.

If you think you could pretty much write the rest of the film yourself, you wouldn't be wrong. Reprisal is the sort of direct-to-video movie that ruled the roost of video stores in a bygone era. They were a dime a dozen back then and Bruce Willis was still a respectable action star headlining top box office films.

Oh, but the times have changed and like so many of his peers before him, Bruce finds himself on the downside of Hollywood glory and all signs point to more action filler fluff films in his future. That's a sad state of affairs for someone who epitomized the action hero for me during my youth.

In a way, Bruce's journey to action has-been mirrors our own transition to middle age. Films like Reprisal are a signpost on the road of life that we are no longer the young spring chickens that we think we are. No, this film is a reminder that all good things must come to an end whether we want them to or not.

Unfortunately for action stars such as Bruce Willis, Arnold Schwarzenegger and Sylvester Stallone, they will never be able to capture the magic of their youth no matter how hard they try. No number of third-rate, discount-bin action films will ever convince us that they are back.

What's even more fascinating is that despite the trailer, Bruce Willis is more of a secondary character behind Frank Grillo's lead. Heck, even bad guy Johnathon Schaech is given more to work with than Willis and that's probably better for the film. The fact is that when Bruce Willis is on the screen, we are reminded of John McClane in his prime and we suffer from a disconnect to this shell of a former badass on the screen.

Beyond the sad casting though, there's very little in Reprisal that breaks new ground. It's a rehash of tired action clichÃ©s and standard heist film tropes. By the time the movie gets to its conclusion, it seems anticlimactic since we already got there in our heads in the middle of act two.

Reprisal is now available on DVD and Blu-ray.