Review: They really should not have let 'Morgan' out 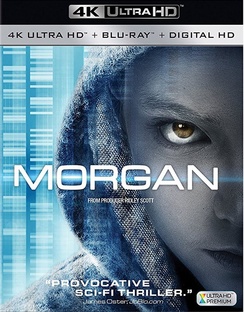 Perhaps I'm being too hard on the film, but ever since I saw The Witch that introduced me to the revelation that is Anya Taylor-Joy, I have been waiting for this follow-up. The other thing that hurts Morgan's ability to be judged on its own merits is the natural impulse to compare it to the far superior Ex Machina.

While Ex Machina is a deep dive into human ethics and the implications of creating artificial life, Morgan is more of a cheap facsimile that basically devolves into just another horror trope. With so many great science fiction films coming down the pipe these days, I suppose it's not Morgan's fault that it was mostly a victim of poor timing.

Humans have always had a complicated history with creating artificial life, whether it's a monster in Frankenstein or a pleasure bot in Westworld. At what point do we stop playing God and address our creations as true equals? It seems that there are two extremes constantly at odds with one another. In Westworld, they were mostly treated as objects, while here in Morgan, their creation is basically treated as the newest member of the family.

In both instances, it's the creators' own hubris that leads to their downfall. For when we dabble in the act of creation, we are unwittingly setting into motion chaotic forces that we no longer control. Basically, everything that Jeff Goldblum's character spouts off in Jurassic Park. For most creative purposes, these chaotic forces end with horrific consequences for their makers.

The potential in Morgan lies almost squarely on the shoulders of the young Taylor-Joy and she appears more than up for the challenge. Unfortunately, just as her character is on the cusp of rising above typical sci-fi tropes, the filmmakers opt for a rushed finished filled with typical horror film motifs that seem to undercut what the film might have been.

Of course, that's not to say that there aren't more than a few bright spots in the film. When Paul Giamatti tries to match wits with Morgan, the versatile character actor is given all that he can from the young Anya Taylor-Joy. Also, there are some rather obvious twists that the filmmakers opt to save for the conclusion, but which I feel would have better served this film had they simply been upfront with them earlier in the film.

Instead, the way the film ends, it is almost as if they are setting up the film for a sequel that, with the film's lackluster box office performance, will never come to fruition. We are enjoying a nice little renaissance in the science fiction genre and filmmakers should strive to take advantage of that and not simply plan for a tomorrow that may never come.

A great example of a science fiction film tip-toeing this line perfectly is the classic film Blade Runner. The ending of the film is open to interpretation, but not so much that it devalues everything that comes before it. In Morgan, the ending is just the last example of the film undercutting its success before it ever attains.

Of course, Blade Runner is getting a sequel finally in 2018, so I guess never say never? Morgan is currently available on DVD and Blu-ray and is definitely worthy of a viewing, especially if you're a big fan of the latest resurgence of science fiction. However, if you're a horror fan, then you might enjoy it even more as Morgan is really a horror film wrapped inside an enigma of science fiction trappings.