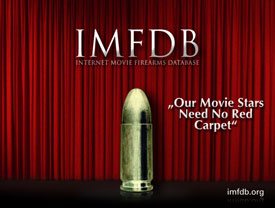 Of course we all love IMDb, the Internet Movie Database. But there are times when the all-encompassing movie and television resource isn't enough.

Thankfully we have sites like the Internet Movie Firearms Database (a.k.a. IMFDB). This destination catalogs the weapons featured in popular movie and TV shows. It's a wiki-style resource which lives on user submissions.

You can search or browse the site by movie/show, actor or even particular firearm. I thought I'd begin my perusal of IMFDB by searching for the famous AK-47 machine gun. The site, unlike myself, is so knowledgeable in the way of weapons that I was immediately presented with this notice:

NOTE: Please keep in mind that while "AK-47" is often a catch-all term for 7.62x39mm Kalashnikov rifles, most so-called "AK-47s" in movies -- particularly American movies -- are actually either Egyptian Maadi ARM copies of the highly improved AKM, or variants of the Chinese Norinco Type 56. Please check carefully to make sure that the rifle in question is a true AK-47 and not an AKM or a Chinese Type 56. When in doubt, it is probably safer to assume AKM or Type 56.

Yeah, that should give you a clue as to the level of detail that can be found here. 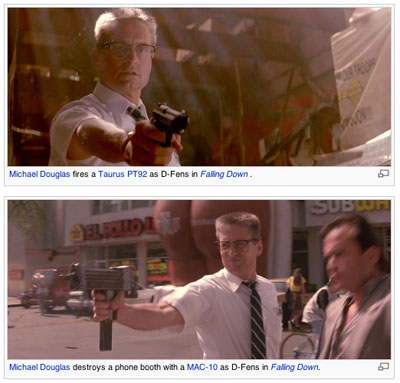 IMFDB also features a wealth of information on fictional weapons. A look at the site's Blade Runner entry shows off the LAPD 2019 gun, a model with two triggers used by Deckard.

The actor pages highlight all the guns used by an individual during his or her career. For instance, action mainstay Bruce Willis has no less than 46 firearm credits -- from a Beretta 92F in Die Hard to the popular M1911 pistol in Planet Terror.

The site is quite a spectacle to behold. One that should become more increasingly rich with future submissions. It also makes a great companion to IMCDB, the Internet Movie Car Database.