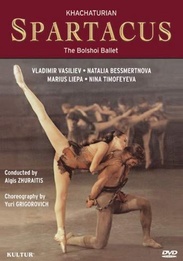 The inherent cinematic approach in Mr. Grigorovich's staging of Aram Khachaturian's score falls perfectly in place. Vladimir Vasiliev, as the slave who leads an unsuccessful revolt against the Romans, dances and acts on a heroic level that is the performance of a lifetime. Marius Liepa matches him on every point magnificently as the villain, the Roman general Crassus; Natalia Bessmertnova and Nina Timofeyeva round out the ballet's great original cast. With its phalanxes confronting the camera head-on and its slow-motion shots of Mr. Vasiliev soaring through the sky, the film takes its chances. It is also one of the best dance films ever made.