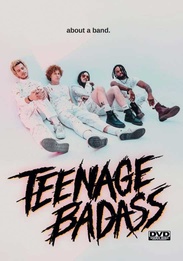 Teenage Badass tells the story of the rise of a fictional indie rock band named Stylo and the Murder Dogs. Set in 2006, we follow Brad (Mcabe Gregg), a teenage drummer who dreams of making it big in a rock band. Brad and his single-mother Rae (Julie Ann Emery) struggle to get by as Brad refuses to give up. On a fluke, Brad joins a new band fronted by singer/songwriter Kirk Stylo. They land a shot to play on a local news show. With the town buzzing from their performance, Brad's dreams inch closer when they're asked to record with Jordan (Kevin Corrigan), a legendary local producer. Just as everything seems to be falling into place, a series of chaotic events threaten everything.