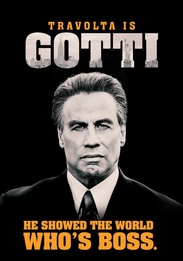 Vito and Michael Corleone, Tony Soprano, Tony Montana. Thanks to Hollywood, they were all considered to be some of the most powerful, influential and feared names in the world of organized crime. John Gotti (JOHN TRAVOLTA) was all that and more. Because he was real. Very real...

A kid raised on the streets of New York, the young Gotti found his way into the Gambino crime family, where he was taken under the wing of underboss Aniello Dellacroce (STACY KEACH). Utilizing a combination of cunning, guile, street smarts, and ruthless determination he quickly and effectively scaled the heights to position himself as a Capo in the organization, proving himself to be a lucrative earner.

Over the course of time, Gotti grew dissatisfied and resentful of the leadership the Gambino crew. His solution was simple. With trusted alliances in place, and strategic planning, Gotti had the boss âremoved,â and soon after, took the mantle of the head of the family.

An immensely profitable venture to begin with, the âfamiliesâ flourished even further under Gottiâs leadership, becoming one of the most powerful criminal organizations in New Yorkâs history. While his other high-level associates stayed far from the limelight, Gotti courted the cameras, displaying a level of charm, charisma and style, which earned him the nickname of the âDapper Don,â and the admiration of thousands of New Yorkers. When he eluded prosecution on three high- profile trials in a row, the media added another nickname, dubbing him the âTeflon Don.â

On a personal note, from the time they exchanged their marital vows, Victoria (KELLY PRESTON) had promised to take care of John and give their children a stable home life, and she asked but one thing from her husband: that he never allow any of their children to be exposed to their fatherâs âprofession.â While Gotti had readily agreed, he would ultimately break that vow when John Jr. (SPENCER LOFRANCO) made the decision to walk away from the military academy he was attending. He asked for, and received the blessing of his father to join the family business. Much like his father had done, Junior quickly ascended the ranks and took his place as his fatherâs Capo.

Constantly under intense surveillance by the authorities, Gotti believed himself to be impervious as long as his crew adhered to the code of silence that he himself had always lived by. It was only when his right-hand man, Sammy âThe Bullâ Gravano (WILLIAM DeMAO), faced with multiple charges that would lead to certain conviction, decided to make a deal with the FBI, and testified against his former boss.

After years of avoiding prosecution, the weight of the evidence and the damning testimony finally broke through the teflon exterior, and John Gotti was sentenced to spend the rest of his life in prison.

Never wavering in his dedication to the syndicate throughout his life, it was from behind bars where Gotti would be faced with the hardest decision he would ever have to make. On a visit to the prison, the younger Gotti asked for his fatherâs blessing to leave the criminal empire. Gotti Sr. is forced to reexamine his life and priorities, and determine for the first time, if he can put the needs of his family over those of "The Family."